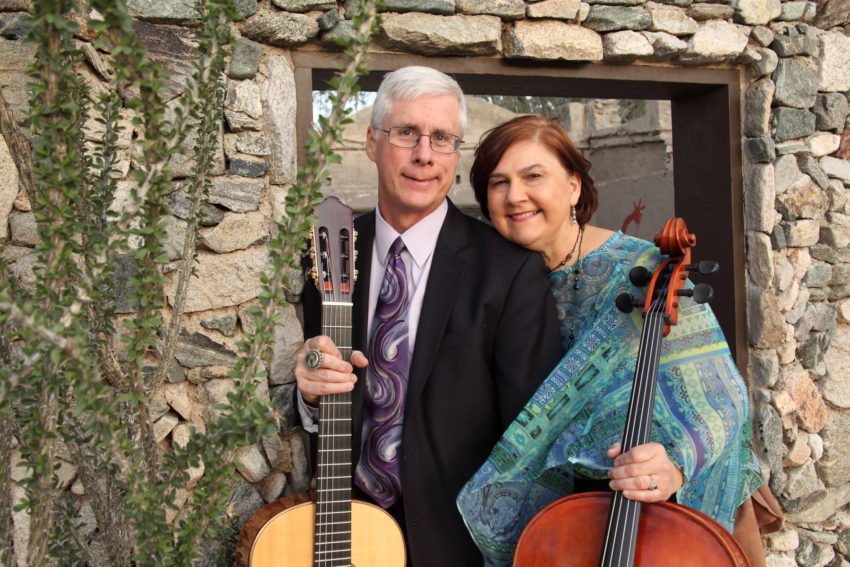 The bride and groom were huge fans of “The Fountain,” a 2006 movie that intertwines three stories about men in pursuit of eternity with their love. They asked if our instrumental duo, Ocotillo, could play the main theme for their renewal of vows.

The piece is not your typical wedding song. It’s minimalist, with the same set of notes played over and over with subtle changes. It’s in a minor key, giving it a darker tone. And the title? “Death is the Road to Awe.”

We didn’t hesitate to say yes. Not even when the couple later decided they wanted us to play different portions of the 8½-minute piece for the bridal party, the bride’s entrance, and the couple’s recessional.

It wasn’t the music we would have chosen. But this was their ceremony, not ours. Every wedding should reflect the personality of the couple. She wore a traditional gown and tiara; he wore a classy black tuxedo with a white shirt, tie, and vest. They included the traditional lasso ceremony of Latin culture. The ceremony music, on the other hand, was far from traditional, yet held the same meaning for them.

Every couple should think of their music in those terms. It’s the soundtrack, not for a wedding, but for their wedding.

Some brides want “Canon in D,” “Bridal Chorus” and “Wedding March” because that’s what they’ve always dreamed of for their wedding.

Other brides want us to play popular hits: “A Thousand Years,” “Thinking Out Loud,” “Can’t Help Falling in Love.”

Some mix and match, with classical for the opening music and pop for the recessional.

Some have requested such songs as the theme from “Transparent,” Cage the Elephant’s “Cigarette Daydreams” or Lana del Rey’s “Video Games.”

We celebrate all these choices. There is no such thing as the “right” music for a wedding. The only “right” music is the music that speaks of your personalities.

On very rare occasions, we do advise against certain songs. For instance, one bride asked for “Yesterday.” When we reminded her of the well-known first two lines, she changed her mind. Break up songs, no matter how lovely, are usually not good choices either.

We don’t do this often, because our Instrumental versions can gloss over a lot. Let’s use Bruno Mars’ “Marry You” as an example. When we play it, most people hear in their mind only the hook: “hey girl, I really want to marry you.” But if you have a singer or DJ, pay attention to the lyrics of all your choices. You probably don’t want “Marry You” sung – unless you’re drunk, looking for something dumb to do and anticipate breaking up in the morning.

But with those caveats, there is little music that you should shy away from using in your ceremony. What matters is that it’s music that matters to you.

As we learned and practiced “Death is the Road to Awe,” I’ll admit we rolled our eyes a few times. Neither the title nor the musical structure fit the image of “wedding music.”

But when the bride entered the hall, glowing and smiling as the tune that held such sentimental meaning filled the air, it all came together. She was living out the message of her favorite movie, about to recommit herself to the man she had chosen for eternity. It was a perfect moment, framed by her perfect musical choice.

Contact Robert Leger at info@ocotillomusic.com. He plays mandolin and classical guitar, and his wife, Cindy, plays cello. Ocotillo is available to play weddings across Arizona.